The Somervell Crime Stoppers hosted the 2020 National Night Out at the Somervell County Court House Square.  The event was put on in conjunction with the Halloween Trunk or Treat.  Several organizations and agencies participated in the event.  Somervell County Sheriff's Office showcased their SWAT Bearcat armored vehicle, Somervell County Fire Department brought over 6 different apparatuses to show off to the public, Game Warden Mike Stevens brought the Operation Game Thief trailer that showed numerous game that had been poached in the State of Texas, Police Chief Buck Martin had a booth set up handing out candy to all ghost and goblins that participated in dressing up for the halloween festivities.
Somervell Crime Stoppers prepared 500 hot dogs for the event.  The nourishment wouldn't have happened with out thanks to Glen Rose Brookshires, Walmart, Kroger, Sysco Foods and many other business that supported the event by donating food an other items.
Also a big thank you to the Somervell Crime Stoppers volunteer board members.  This would not have happened without all of your help and support.
Thank you! 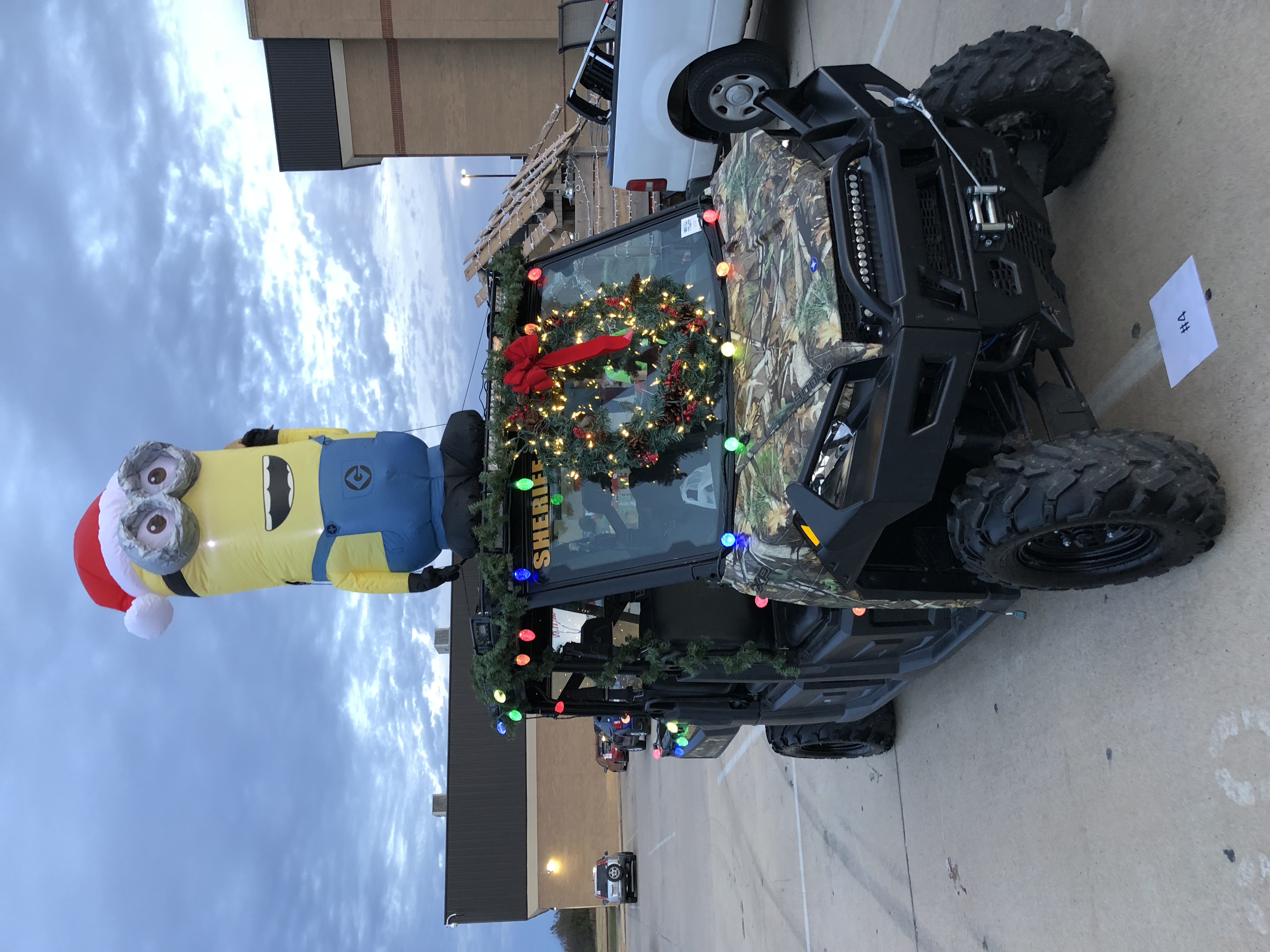 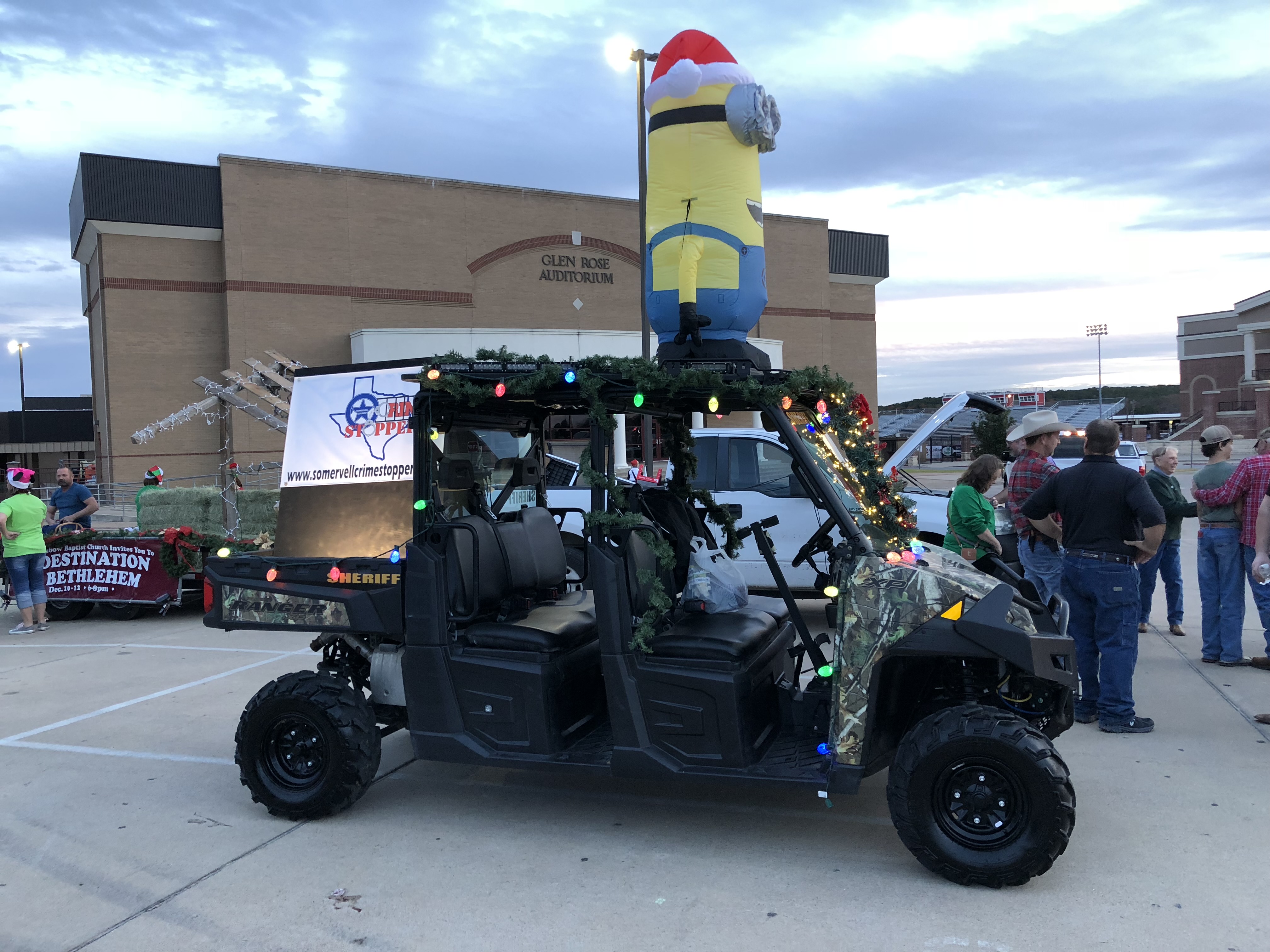 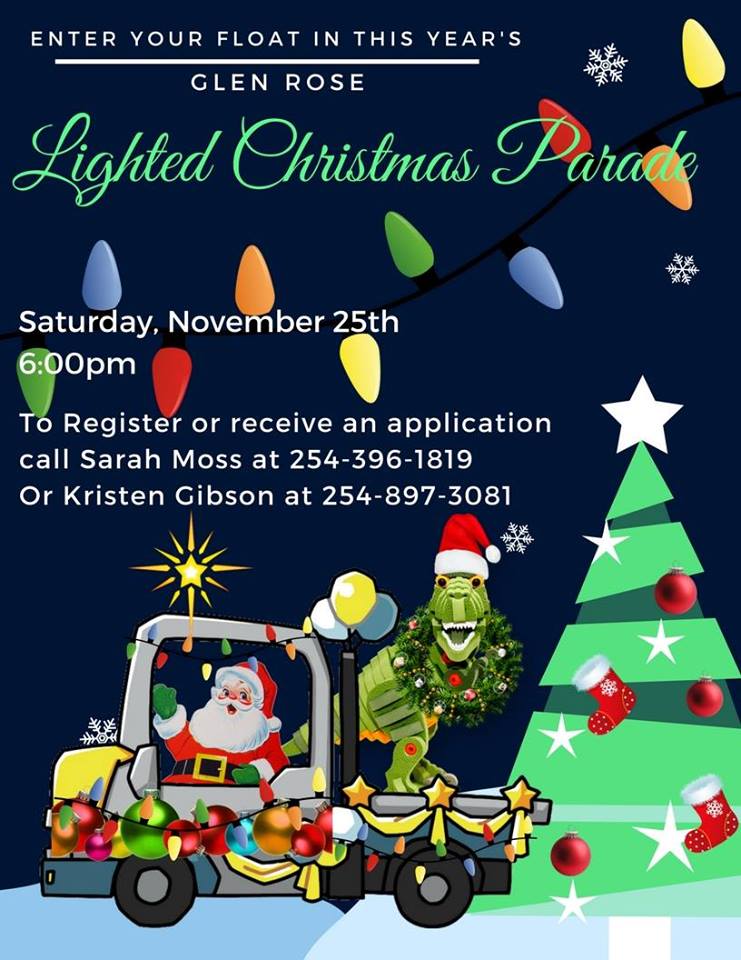 Come join in the fun and festivities down on the square.  The parade starts at 9pm and goes through town. 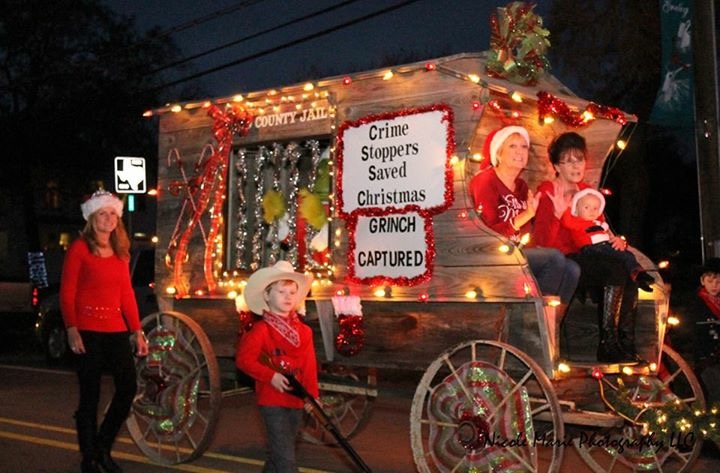 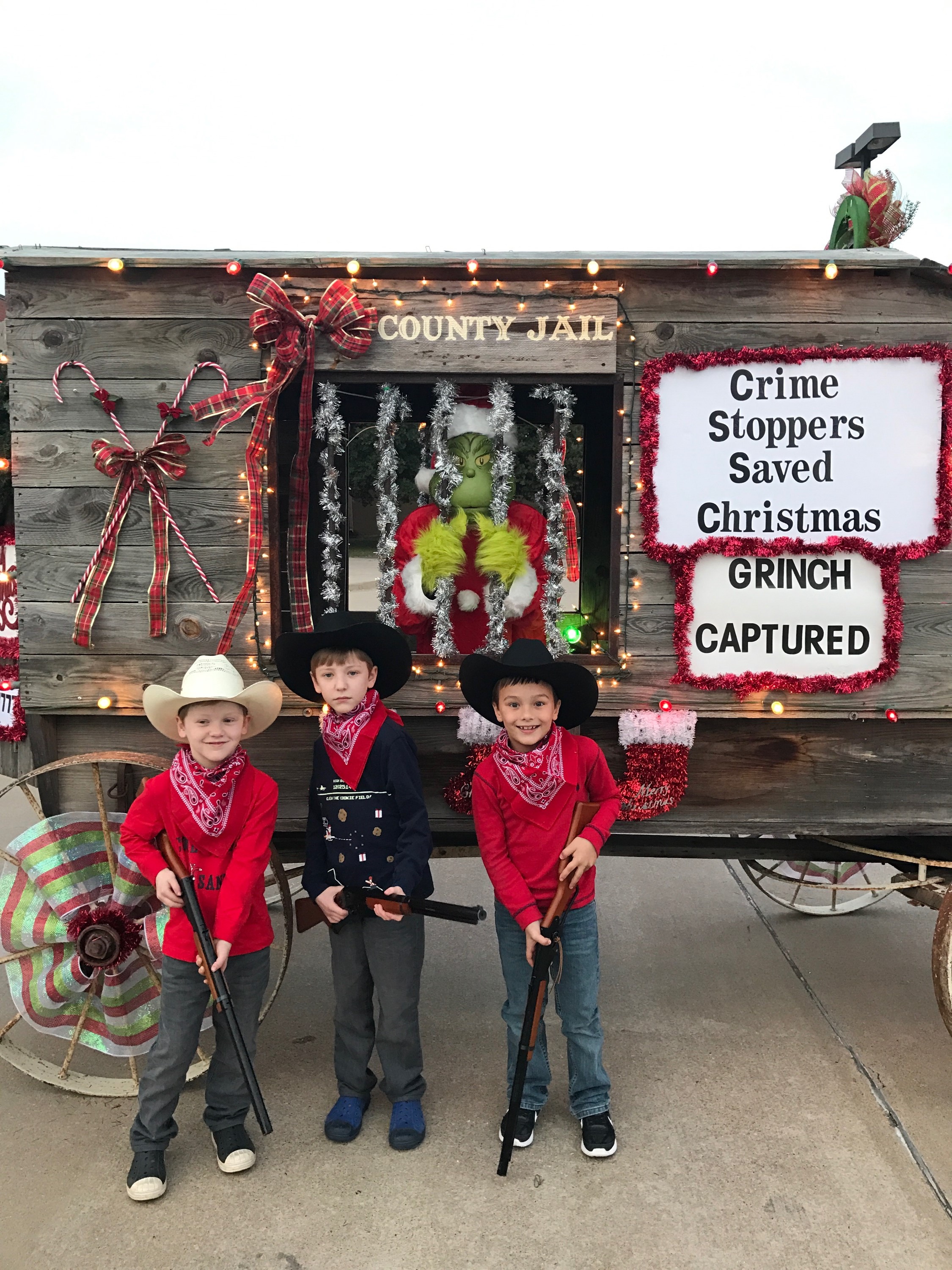 Activities begin with a Bike Rodeo at 4:30pm and then focus on the square around the old courthouse for the remainder of the evening, culminating with a street dance featuring the Mike Daniels Band.

National Night Out celebrated 30 years  as a community activity across the United States in 2013.  Neighbors organized block parties and spent time talking to those who live around them.  In Glen Rose, our celebration will include proclamations of appreciation for our first responders and family focused activities around the square.

A schedule of events is on the National Night Out page. Plan to bring your family and your neighbors and "Fill the Square" October 25! 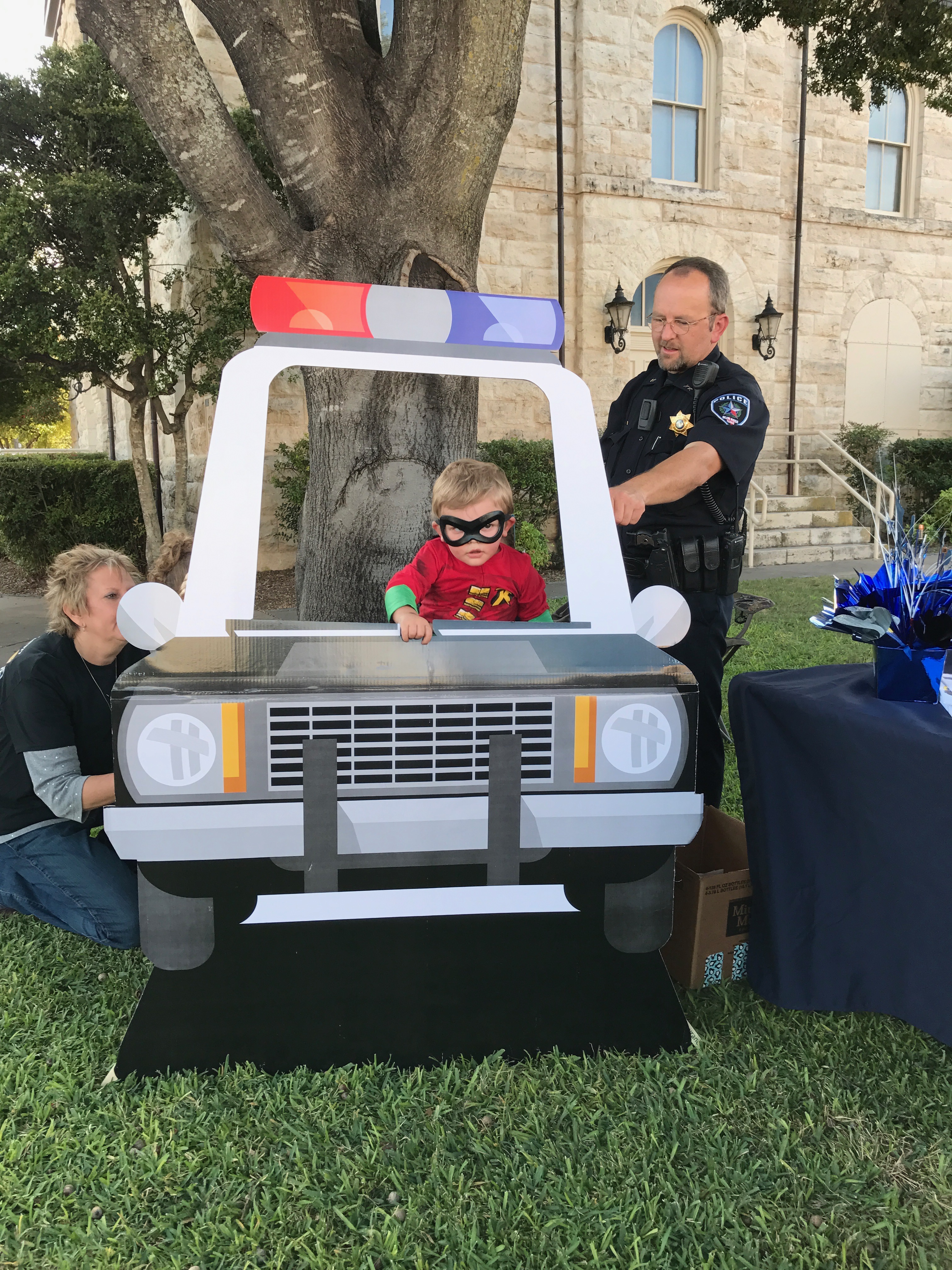 Active Crime Stopper Organizations are required to attend the annual conference to maintain a current level of awareness on best practices and trends in law enforcement.

Crime Stoppers thanks the following contributors for donating to the emergency supply kit for our teachers in all the GRISD schools.  We call these bags "GO BAGS" because they provide teachers with a quick resource in the event of evacuation, or shelter in place due to bad weather or lock down.

Crime Stopper Board Members packed the bags over the summer and Officers Alan West and Shane Tipton delivered them to teachers the first week of school.

Once again Crime Stoppers shared information with the public about our tip line at the annual Health Fair held at the Expo.

McGruff the Crime Fighting Dog appeared and posed with young and old for pictures.

Popular from the Sheriff's department were the "bottle glasses" that give the illusion of being drunk.  Cheerful participants staggered from point A to point B.

A drawing for an I-Pad created quite a stir and winning this year was  Carli Byerly.  A number of I-tunes cards were also awarded.

SCCS thanks all those who show their support of the efforts of  the crime stopper program through their donations in the raffle ticket drive.  We are delighted to present Tracy Williamson of Vogue Hair Design with an IPAD.

Your support enables us to share with the Glen Rose community the best methods for reporting tips through both printed brochures and our website.

SCCS distributed community brochures listing steps for providing anonymous tips from a booth at the GRMC Health Fair on Friday, August 2, 2013.  McGruff the Crime Dog made an appearance to the delight of children and the young at heart alike and presented them with "Junior Deputy" McGruff badges encouraging them to help "Take a Bite out of Crime."

June was a very good month for the Somervell County Crime Stoppers as community groups showed their approval for the work of the organization with sponsorships. Before Officer Derrell McCravey turned on the projector to share the newly activated Crime Stoppers web site with the club, Lions presented him with a check for $500.00.  The monies are aside to provide brochures to GRISD students that focus on how to text a tip to the Crime Stoppers hotline.

Derrell McCravey spoke at the June Chamber of Commerce meeting about the Somervell County Crime Stoppers.  Taking Chamber members through the recently activated Crime Stoppers website, Officer McCravey emphasized the need for the community to step forward and volunteer information on open cases.

SCCS is funded by a percentage of collected court fees and donations from  the private sector. Following the presentation, LDL Educational Resources Foundation, became a platinum sponsor.  The generousity of LDL supports the costs of providing the community with materials for their training and awareness in resolving open crime cases.

Somervell County Crime Stoppers is pleased to announce the 2013 recipient of the SCCS scholarship is Alex Dahl. Ms. Dahl dreams of serving as a U.S. Marshal and takes her first step to realizing that dream with classes this fall at Tarleton State University.

In a portion of her scholarship application, Alex writes:

"I choose to be the pebble thrown into the puddle that causes a ripple effect throughout the entire body of water. My commitment to lead by example with fairness and judgement will surely change the environment, if only a small piece at a time."

SCCS is proud to support Alex on this first step of her journey and offer our congratuations to her parents, Anders and Susie Dahl.

The Somervell County Crime Stoppers Board will open the January meeting to the public January 17, 2013.  The meeting, hosted at the Glen Rose ISD tech center, provides the board with a forum for sharing progress of 2012, showcasing the newly designed web page and promoting use of Tipsoft software for collecting anonymous tips from both the web page and telephone sources. A short board meeting will be held prior to the open house.  The public meeting will begin at 6:00pm.

Students from Glen Rose High School Art I classes submitted ideas to the Somervell County Crime Stoppers for a new logo design.  Over 61 pieces of art were reviewed by the selection committee.  A group of 12 designs made up the first round of considerations.  A final group of four designs were shared with the committee and were ranked by each member.  Finalists were Drayton Williams, Jason Rambo, Josh Beeson  with the chosen design belonging to Justin Beeson.The board also chose to utilize the motto provided by Jason Rambo, "It only takes one call to stop crime."

Appreciation to Randy Haney, Glen Rose High School Art teacher, for promoting this project to his art students.  It is in the spirit of the Crime Stopper program that we help each other and there is no finer community than Glen Rose, Texas to serve as an example of mutual support.

The annual Glen Rose Medical Center Health Fair served as a "coming out" party for the Somervell County Crime Stoppers, Inc.  The board, after collecting donations from the public, placed the donor names in a basket and selected one to receive a 32" Sanyo flat screen color TV.  Congratulations to  Sharon Patton, who  left the Expo Center with the new TV.